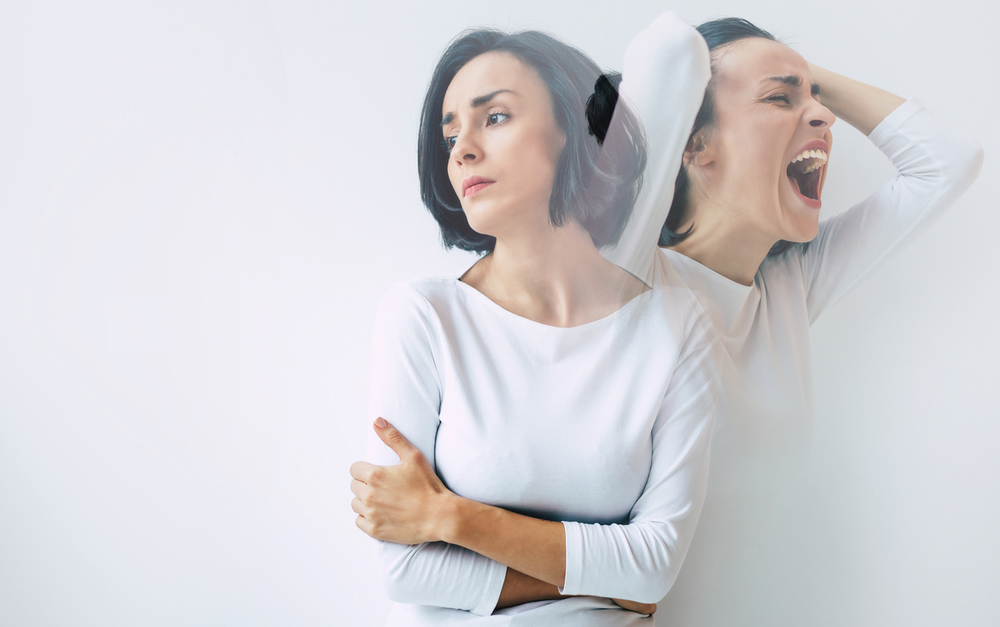 What is transcranial magnetic stimulation? Or TMS?

Transcranial magnetic stimulation (TMS) is a non-invasive form of brain stimulation therapy that has proved effective in the treatment of neurological and mental health conditions such as depression and general anxiety disorder.

How does TMS work?

TMS uses a magnetic field to deliver a short-lasting electrical pulse into the brain where it stimulates neurons (nerve cells). This has been shown to improve communication between different areas of the brain particularly in the superficial regions of the cerebral cortex.

Repetitive transcranial magnetic stimulation (rTMS) is a type of TMS. During the treatment of depression and other neuropsychiatric disorders, the pulses are repeated quickly one after the other, thus gaining the name rTMS. You will find both terms referred to when talking about TMS therapy. 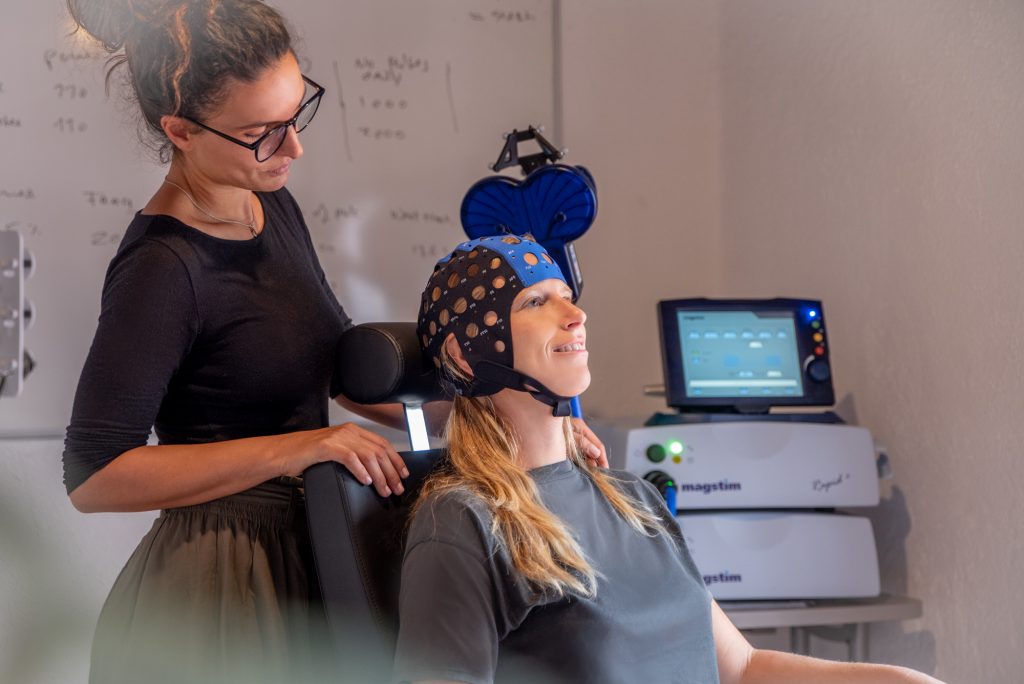 1. TMS is non-invasive
TMS is non-invasive, meaning it works outside the body. It does not require surgery or the implantation of electrodes. During a diagnosis session or treatment therapy the TMS machine sends a mild electromagnetic pulse, or wave through the skull into the brain to stimulate targeted areas; specifically, those cells involved in mood regulation which release neurotransmitters like serotonin and dopamine. The waves used are similar to those of a magnetic resonance imaging (MRI) scan, and are completely harmless, and painless.
Before a session, the TMS operator will ask the client to remove any jewellery, or objects which could be affected by the magnetic waves such as credit cards. The therapy machine makes a fairly loud clicking noise which can be disturbing so often earplugs are given to reduce any discomfort.
A small electromagnetic coil is placed against the scalp, the exact positioning is determined dependant on an individual’s head size, which areas of the brain are to be targeted, and which type of machine used. It is through this coil the machine creates the small magnetic waves which stimulate the nerve cells.

Electroconvulsive therapy (ECT) is another tried and tested treatment method for brain disorders, however the benefits are only short term and either frequent sessions are required, or medication is used to supplement ECT. The side effects associated with ECT include headaches, difficulty in retaining information, long term memory loss, confusion, and muscle aches. Whether this is down to the ECT treatment itself, the extremity of the procedure, or the general anaesthesia needed for it, is unclear.

TMS is not completely side effect free, but the minimal effects felt by some during the actual stimulation process, which can include a mild headache or dizziness and slight scalp discomfort, are usually brief and will go within minutes of the session concluding.

3. TMS does not require sedation or anaesthesia

TMS therapy can be done in a rehab clinic or hospital outpatient setting. There are no negative effects and patients do not need to be accompanied as they are able to function normally afterwards and can drive themselves immediately following the session.

4. TMS is not addictive

Some of the pharmaceutical-based treatments for depression and emotional disorders carry the risk of addiction. TMS is totally non-addictive and has in fact has been proven to be effective in treating substance addiction, and other co-occurring conditions such as PTSD and bipolar, and is used at several private rehab centres to help addicts and alcoholics alike.

5. TMS is effective and has long term results

TMS has shown to be up to 70% effective in the treatment of mental health disorders; and the results continue long after the treatment is over with 90% of people feeling the benefits 12 months later. It has also demonstrated positive outcomes in patients who previously did not respond well to the use of antidepressant medication. 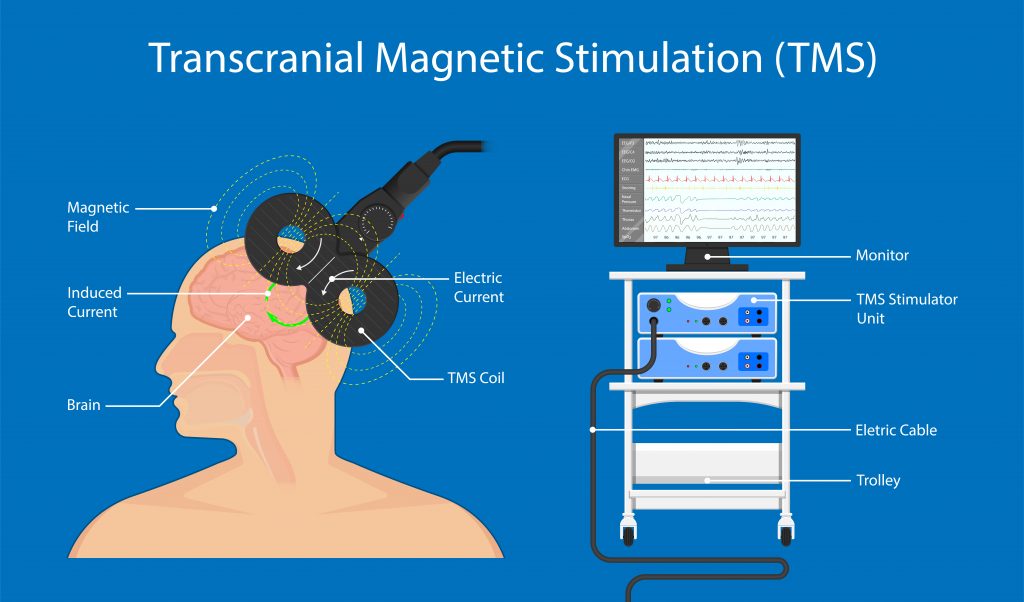 What is TMS used for?

Pioneered in 1985, at the University of Sheffield by Anthony Baker a medical physicist, TMS was developed for the diagnosis of depression. Since its introduction, it has undergone extensive research and clinical trials and is now known to be successful in the identification and treatment of several other neurological illnesses and psychiatric disorders. TMS treatments have been approved by NICE in the UK and the FDA in the USA.

TMS is now used in varying degrees to detect and treat the following:

Here at our luxury rehab centre in Ibiza, you can experience TMS in a safe and contained residential setting. We perform TMS on-site as a part of our broader treatment program, in conjunction with the more traditional approaches to addiction and mental health disorders such as individual and group talk therapy.

For information on all the therapies we have available here at our rehab centre in Spain, and details on admissions contact sharon@ibizacalm.com