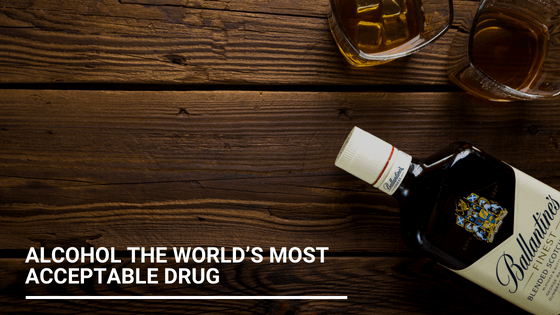 You probably first tried it as a teenager maybe you even had the odd sip as a child. It’s used to celebrate most occasions, its legal and advertised on T.V, you can purchase it from your local shop or supermarket, even from a petrol station, alcohol. You can consume it on your lunch break, its cheap and widely accessible which is confusing as alcohol is a drug, an addictive and dangerous one, responsible for thousands of deaths and countless injuries each year.

Even the guidelines for the limit of alcohol consumption make for very confusing reading. The recommended limit, differs from country to country there’s no universal guideline but Spain’s recommended daily limit is the highest in Europe. Spain’s guidelines of no more than four standard alcoholic drinks per day for men and women no more than two per day (this is twice the recommended amount in France). In the UK the recommended alcohol limit is 14 units a week for men and women, which is the equivalent of 6 pints of 4% beer, 6 small glasses of wine or 14 single shots. Overall Europeans are statistically the world’s heaviest drinkers with alcohol consumption in Europe almost double the world average but the consumption various dramatically between countries and regions.

Drinking alcohol can be seen to relax you, increase confidence, boost your mood, which are all things that can lead people to become reliant on it and use it as a crutch. It triggers the same pleasure centres in the brain as other drugs, altering the brains chemistry, affecting our thoughts, feeling and actions. As well as the pleasurable effect of alcohol increasing with each drink it also can trigger, unpredictably a negative emotional response leading to anger and aggression. Many reach for alcohol to lift their mood but this is short lived as alcohol is actually a depressant and can contribute to depression and anxiety causing a vicious cycle of using alcohol to escape negative thought processes only to exacerbate them. Alcohol is a ‘gateway’ drug that can often lead users onto other substances. Alcohol also lowers inhibitions and can cause the user to make dangerous choices.

Alcohol consumption in today’s society has been normalised to such a degree that it has become more acceptable to drink that not to drink. Alcohol is the only drug that if you try and cut down it is generally frowned upon and actively discouraged by peers and society as a whole. Despite the health warnings and known risks of alcohol misuse consumers don’t take the guidelines seriously. High functioning alcoholism has become the most prevalent, undetected and accepted drug abuse in society. All this isn’t so surprising when the drug has been made as socially acceptable as drinking water.

What Is High-Functioning Alcoholism?

High-functioning alcoholism is the most common form of alcohol abuse it is often not taken seriously by most people and can easily go unrecognised by the user, their family and friends. An outsider looking in may notice that the individual has a significant drinking habit but if it isn’t affecting that person’s job or their relationships and if they don’t wake up in the morning and reach for the bottle then their drinking isn’t considered to be a problem. However, this more often than not can be the beginning of a slippery slope, leading to a higher tolerance, health problems and serious alcohol dependency.

5 Tips For Managing The Pressure to Drink

Whether you’re in recovery, realise you have become dependent on alcohol or simply want to cut down, being armed with some useful coping strategies can make all the difference.

At Ibiza calm we understand how difficult recovering from an alcohol addiction is, recovering from any addiction has its challenges but alcohol has the added difficulty of being so prevalent and accepted by society as a whole that the every day pressure to drink can be overwhelming. Our team of experts will help you unravel your relationship with alcohol and guide you back to the best version of you. Please call our team of experts today and seek the help you require. Ibiza Clinic, Spain +34 664 443 433.

John Mckeown, the co-founder of Ibiza Calm and a fully trained Addiction Counsellor and Clinical Psychotherapist recently featured in a BBC 2 documentary ‘Drinkers Like Me’. It is a very interesting documentary based on Adrian Chiles who takes a long hard look at his own love of boozing. He wants to find out why he and many others don’t think they are addicted to alcohol, despite finding it almost impossible to enjoy life without it. You can view the documentary on BBC Iplayer on the following link. https://www.bbc.co.uk/programmes/b0bhkc8b (only available in certain regions).