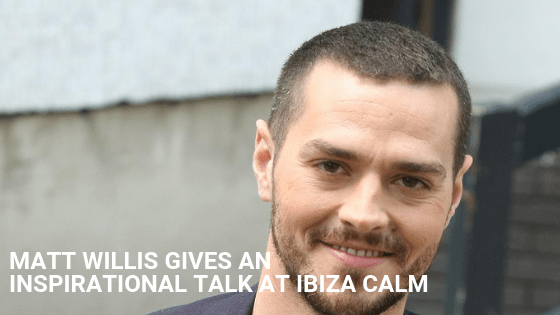 English singer-songwriter, television presenter and actor, Matt Willis, recently paid a visit to Ibiza Calm where he attended a meeting and delivered an inspirational talk to the clients.  Matt chronicled his struggle with drugs and alcohol that began as a teenager, when he was thrust into the limelight as a bassist and vocalist for Busted, a famous UK pop punk band. He developed a social anxiety that came along with the newfound stardom and continued to take drugs and drink heavily well into his twenties. In that time, he says honestly, “Drugs were a part of me!”

It was in the aftermath of the break-up of Busted in 2005 that Matt’s problem with alcoholism finally came to a head. He was admitted into rehab at the age of 21, then again in 2006 at 23, when he began to exhibit physiological and memory deficiencies, stemming from his decade long addition to cannabis. It was not until 2008 at age 25 when once again Willis was admitted to rehab, taking a full five week course in drugs and alcohol, that he was finally able to declare himself drug and alcohol free.

Matt finally came to the realisation that he needed to ‘get clean’ for his family. The catalyst came in the form of his first child, Isabelle in 2005. That event finally made him see that he needed to change his ways. As he has been quoted, “I was a bit of a naughty boy and I always knew that I couldn’t keep it up forever, but nothing would stop me! Then I had a daughter and I was like, ‘See ya!’ It was the biggest fork in the road for me.”

Matt also credits his wife Emma Griffiths, a TV presenter and UK celebrity in her own right, for the love and support she gave to him during his alcohol addiction.  Her support cannot be understated in Matt’s recovery and in general it is the unwavering support of those closest to the addict that can add strength to overcome and later to ensure that a relapse does not occur. Alcoholism is an illness, not something an individual chooses or simply the product of somebody with no will power. It is an illness that can be treated and managed successfully with the right help and support.

Matt and Emma were married in July 2008, and they now have two more children Ace and Trixie Grace and continue to thrive personally and professionally. Recently they renewed their wedding vows and Matt’s band Busted have reformed. However in this go round he understands clearly now the patterns at the root of the problem he encountered in his former life and is committed not to repeating those past mistakes.

Thank you to Matt Willis, for coming to share your experience and inspirational words with us here at Ibiza Calm.