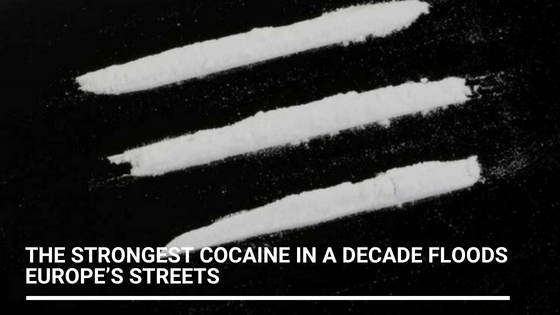 The Strongest Cocaine In A Decade Floods Europe’s Streets

According to the recent report from the European Monitoring Centre for Drugs and Drug Addiction street level cocaine is at its highest purity in over 10 years across Europe. The quality may have gone up but the prices have remained relatively unchanged. The clamp down and seizures of bulking agents by law enforcement across Europe has been suggested as one of the potential reasons for this increase in purity as well as increased cocaine production in South America. Dealers use bulking agents to cut the drug, which can add more risk to the process as the drug is in their hands for longer and uses more resources. The end to the cutting process means the cocaine is out of the dealer’s hands quicker so reduces the risk of detection.

The increased purity of cocaine has many repercussions, the most worrying is a huge increase in cocaine related deaths which have more than doubled in the last decade in England and Wales alone. The UK in fact are among Europe’s biggest users of the drug with 4% of people aged 15-34 saying they had used cocaine in the past year. The second highest was the Netherlands, with 3.7%, the third highest was Spain with 3%.

According to the report, cocaine is the most commonly used class A drug in Europe with an estimated 17 million European Adults aged 15-64 trying cocaine in their lifetime, a whopping 5.2% of people within this age range. Roughly 2.3 million of young adults aged 15-34 (1.9%) have used cocaine in the last year. An increasing number of people are seeking treatment for use of the drug, a large amount of these, entering treatment for the first time.

Cocaine has the widest demographic of users for a class A drug effecting all ages and levels of society. It has become very quick and easy to obtain and affordable making it more accessible to all.

Could There Be A Fine Line Between Recreation And Habit When It Comes To Cocaine?

Famously used by people in industries including the media, fashion, hospitality and financial sector as a way to keep up with the ‘work hard, play hard’ culture. Glamorised by the media, as well as countless high profile celebrities, is it any wonder that cocaine has become more socially acceptable?

There is no dispute that cocaine is one of the most addictive drugs in the world especially crack cocaine (which can lead to addiction after just one use). Physical cocaine addiction may not occur as quickly as other narcotics, like heroin but a psychological addiction is more likely to take a hold and the withdrawal can last a lot longer. The more rapidly the drug reaches the brain the more likelihood the user is to develop a dependency. Smoking the drug reaches the brain faster than snorting the powder this is why crack users are more likely to develop an addiction faster.

Taking cocaine can make the user feel wide awake, euphoric and confident, this over inflated sense of ‘self’ can lead to the user taking careless risks and getting into dangerous situations. Other side effects include, a raise in body temperature, suppressed appetite, increased heartbeat, blocked sinuses anxiety and paranoia. The long-term use can cause further more serious irreversible health conditions including heart problems and neurological issues as well damaged nose cartilage.

Alcohol and cocaine abuse often come hand in hand, cocaine enables the user to consume more alcohol than they normally could without it, giving the illusion of being more in control. Mixing cocaine with alcohol and other drugs can increase the side effects but cocaine and alcohol is particularly dangerous when mixed together in the body as it produces a toxic chemical, called cocaethylene.

As cocaine addiction can develop relatively slowly with the average regular cocaine user developing a habit over about a year. This gradual process can make it harder for users to recognise that they have a problem especially if cocaine use is normalised within their peer group.

If this highly addictive class A drug has become the ‘norm’ in your social circle how can you tell when cocaine use has become out of your control?

6 Questions to ask yourself regarding your cocaine use

If you’ve answered YES to any of the questions above your cocaine use might have become more of a habit than you thought. The good news is help is at hand. At Ibiza calm we have witnessed the increase in cocaine addiction and helped many cocaine addicts on their road to recovery. We have trained experts on hand to help answer any questions, give advice or simply listen. We understand the fear of facing up an addiction and admitting there is a problem but you are not alone. Please get in touch with us today, there are many ways in which we can help you.