We are proud of our team 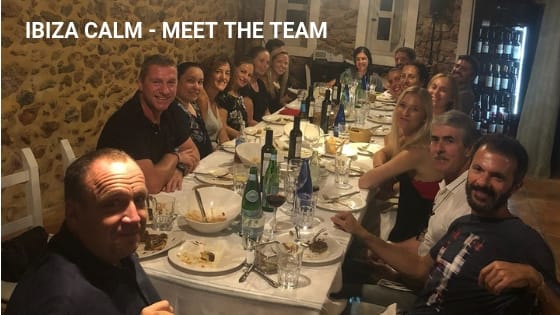 We are proud of our team

Meet The Team at Ibiza Calm

We would like to introduce our team of experts here at Ibiza Calm, hand picked for their knowledge and expertise. They are all play a vital role in making your stay here at Ibiza calm a comfortable and transformative one.

John McKeown trained in London as an Addiction Counsellor and Clinical Psychotherapist at Guy’s, St Thomas’s and King’s School of Medicine. He is registered with UKCP (UK Council for Psychotherapy) and has worked in the addiction and mental health field since 1987. He has helped to develop many inpatient and outpatient rehabilitation clinics across the UK.

Stephen Clark has been involved in the field of addiction recovery for the last 16 years. He has lived in southern Spain for 12 years where he has successfully established several businesses. His experience and knowledge have been essential in establishing Ibiza Calm.

Dr Rodriguez has lived in Ibiza for 10 years mainly specialising in the area of community psychiatric care in the public health system, where he has also been the resident trainer of doctors.

Billy has worked in the addictions field since 1994. His extensive qualifications include a diploma in management (Goldsmiths University,) an advanced diploma in counselling, certificates in family counselling, supervisor training, working with co-occurring disorders and he is also an EMDR trauma specialist.

Billy has had a varied career, working at the Maudsley Hospital, community Drug Project, in South London, a charitable organisation, where he served as manager. He worked at the Priory Hospital in Roehampton for several years and established his own private Practice on Harley Street. As well as working as a consultant in the music industry as a travelling therapist. Touring with bands such as the ‘Rolling Stones’, ‘Bring me the Horizon’ and many more. He worked with Riverman management, helping them identify and implement policies regarding touring with the many bands they manage. Billy is an accredited member of the British association of counselling and psychotherapists (BACP).

Camilla is an integrative therapist, who holds an MSc in Addiction Psychology and Counselling from London Southbank University and is a member of the BACP. She has also trained with the Oxford Cognitive Therapy Centre in CBT and holds a psychotherapy qualification from Regent’s College, London.

Having worked extensively in treatment centres and in private practises, she is used to helping those with addiction, anxiety, depression, burn out, co-dependence, eating disorders and personality disorders. Camilla also has extensive knowledge of how addiction affects the family as a whole and has run many family therapy groups.

Lluc has a Bachelor of Psychology, with a Master degree in Drug addictions, University of Barcelona (UB). He has 5 years experience in mental health and drug addiction prevention, treatment and working on public projects. Lluc moved to the Peruvian Andes to dedicate himself to the social development of local projects.

Now back in Spain he works at Ibiza Calm as well as developing prevention and health promotion projects on the mainland. He is currently taking as post grad in Logotherapy at ALEA.

Millie has 4 years administration experience, and has recently qualified to teach English as a foreign language. She has lived in Ibiza for nearly 5 years and loves to explore the nature of the island. Millie enjoys working in an environment that supports individuals recovery and well being.

Dr Charles Triay qualified at Westminster Hospital London in 1982. He worked within St. Mary’s Hospital group in London including Senior House Officer posts in Accident and Emergency and Paediatrics. In 1985 he moved to Spain, to help his father Dr. S.H. Triay to build up his general practice.

In 1988 he started voluntary work as a doctor assisting drug addicts to detoxify. This progressed to helping alcoholics on the 12 step programme Alcoholics Anonymous. From 1991 to 2001 he was the director of the local government’s drug dependency programme, which included outpatient and inpatient programmes as well as a methadone programme.

He is a widely experienced general adult psychiatrist and provides care and treatment for people with a broad range of mental health complaints. He specialises in the treatment of addictions and perinatal conditions.

Dr. van Huyssteen provides a dynamic, holistic approach to care with the main focus on establishing a strong therapeutic relationship with his patients. He works collaboratively in order to achieve the best possible outcome and runs a thriving private practice both in central London and Hertfordshire. He works with a network of Psychologists, Therapists and other Physicians.

Dr Brener is an experienced Consultant Psychiatrist in the UK, qualifying in Medicine at Westminster Hospital Medical School MBBS in 1984. He became a Member of the Royal College of Psychiatry (MRC Psych) in 1988. He has held major positions across London’s most established Hospitals:

Today Dr Brener is Consultant Psychiatrist at The Priory Hospital North London; he has been intrinsic in the development of ATP programmes at the Priory since 1997.

He has private practices in Central London and Harley Street. Dr Brener regularly speaks on the treatment of addictions, anxiety and depression internationally and in the UK.

Dr Brener has dedicated his career to the treatment of Mental Health disorders and specialises in the benefits of treating addictions and co-existing disorders concurrently.

Ilse Holwarda graduated with a bachelor’s degree in Social work from the Windesheim University in Zwolle, The Netherlands.

Ilse specialised in addiction completing the minor Addiction Science. She gained experience as a family coach (case manager) working with “multi-problem” families in their homes and as a personal mentor (counsellor) at a crisis centre for homeless people. Ilse also worked in housing people with mental health issues.

She loves being creative, often co-facilitating the art class and Ilse understands the benefit of music as a therapy so has been known to pick up her guitar and show case her talents here at Ibiza Calm.

Ilaria also worked in an anti-violence centre and at a private practice in Rome.

She loves being in nature and brings this enthusiasm for the outdoor life to her work at Ibiza Calm.

Sharon has been in the recovery field since 1997. She is a counsellor and life coach with lots of experience helping people with addiction issues.

Isabel has a Bachelors Degree in Nursing from University of Pontificia Comillas, Madrid. Her postgraduate training includes Masters degrees at the University of Barcelona and Valencia. After two years working in mental health in Madrid, she moved to New Zealand to study English and work in the public hospital in Auckland. After two years, she decided to return to Spain and work in the emergency department of the public hospital in Ibiza. Already having finished her master in the prevention and treatment of addictions, she is now focused on her postgraduate training alongside working at Ibiza Calm.

Lucia has a Bachelors Degree in Nursing from the University of Oviedo. After graduating she developed her professional career in geriatrics, palliative care, mental health and  teaching health education workshops in a public mental health community centre. She completed her Masters at the University of Oviedo. For the past four years she has worked in the emergency unit at the public hospital Can Misses and well as Ibiza Calm since for the last two years. Lucia is currently studying a postgraduate course in prevention and treatment of addictions.

Mercedes graduated in physiotherapy and has a Bachelors degree in Nursing, both at the University of Córdoba. She has done several courses of pedagogical adaptation and emotional intelligence. Mercedes is an expert in human resources management as well as health services management. She has been living in Ibiza for 13 years and as well as working at Ibiza Calm, she also works in the emergency unit of the public hospital Can Misses in Ibiza.

In 2009 Belen graduated in Physiotherapy at Barcelona (Fundació Universitària del Bagès) and in 2011 a degree in Nursing at the University de les Illes Balears. Since then she has been working in Can Misses, the public hospital here in Ibiza. Where she has gained experience in mental health care as well as Emergency and Intensive Care. As part of the team at Ibiza calm she enjoys encouraging individuals and helping them through the treatment process.

Roxanne studied and worked in the United States, in schools, treatment centres, and community mental health clinics. Roxanne works with co-occurring disorders, crisis intervention, and psycho-education, and counsellor trainings. She has a ICADC II (International Certified Alcohol and Drug Counsellor) credential and was President of the Board of Spain Certified Addiction Counsellors, IC&RC (2013-2015).

Veronica has 10 years experience working as a chef, and has lived in Ibiza for 7 years.

She ensures all residents have balanced, nutritional diets, and mindfully prepares each meal to suit the individual’s needs.

Veronica uses fresh organic ingredients, including vegetables picked from our own vegetable patch and free-range eggs from our chickens.

Luz and Mihaela make our clients are as comfortable as possible during there stay at Ibiza Calm. Luz prepares a daily balanced breakfast and together they take care of cleaning the rooms and the property.

Fernando is responsible for the maintenance of the property, the pools and the extensive garden. He has been living on the property for the last 15 years and is always keen in keeping everything running smoothly.