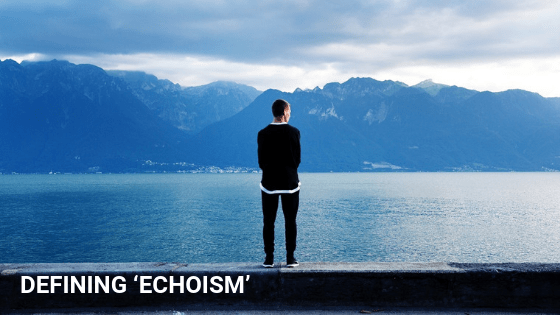 One particular type of co-dependency that has been gaining more attention in psychology circles in recent years is that of the Narcissist and the Echoist. Whilst the widely known trait of ‘narcissism’ is defined by extreme selfishness, with a grandiose view of one’s own talents and a craving for admiration, ‘echoism’ is the flip-side.  An echoist person focuses on others at the expense of their own needs. They are often people pleasers, the kind of people who find it hard to accept praise or compliments and who will always listen to other people’s problems, but never talk about their own. They tend to hate being the centre of attention, won’t ask favours and often blame themselves when things go wrong, regardless of if it’s their fault.

The terms ‘narcissism’ and ‘echoism’ share their grounding in the Greek myth of Narcissus. The beautiful hunter Narcissus was fated to lust over his own reflection until he pined away to nothing. But there is another character in that myth that is often overlooked. Echo was the once-talkative nymph who is cursed to forever repeat back the last words she hears. Her undying love for Narcissus is callously spurned until she too fades and dies. Echo is the silent partner to Narcissus’s cruel vanity. In terms of the psychological trait, echoists have learned to survive by echoing the needs of someone else.

Echoists often grow up with a narcissistic parent or influential family member, the result of which is they tend to seek out partners and friends with whom they repeat this dynamic. In order to feel loved, they feel they must give everything and accept as little as possible, which is how they can sometimes end up in enabling roles to somebody suffering with addiction. But echoists are not classic doormats, they tend to be kind and supportive and they are by no means naïve or stupid. Many are intelligent and successful which adds to the frustration and confusion they feel in trying to work out how they’ve ended up in destructives relationships. Nor are echoists the same as introverts. Introverts tend to be quieter, more likely to spend time reflecting and processing things, whereas echoists tend to be introverted because they’ve learned it’s unsafe to express themselves. Narcissists are experts at making subtle digs and comments, or ‘gaslighting’ denying their own bad behaviour until the echoist starts to doubt themselves instead. Being in a relationship with a narcissist can leave the echoist feeling they are ‘not good enough’, and, in extreme cases, like they are going mad.

As mentioned, defining ‘echoism’ is a relatively new to psychology. Preliminary studies are showing that many people are recognising the traits in themselves. Given this growing amount of interest, a lot of research is being done about whether it is just a trait, or if in extreme cases it can grow into a condition or a disorder. Additionally it is currently unclear if it arises predominantly with females, or if it is equally prevalent in males as well. There is also debate in psychology about how echoism it should be addressed, because co-dependency is considered a spectrum and both the traits of narcissism and echoism may appear in all relationships to some degree.

In extreme cases of echoism a therapist should be consulted. However, anyone can shift away from echoism by learning how to share normal disappointments. That is, in healthy relationships, we can assert our needs in kind ways when they aren’t met, share when we feel lonely, ask for comfort when needed, and express a preference without worrying that we’ve become a burden.  Self-blame is an action, not a feeling. It’s something we do to ourselves — a way of maintaining echoism by burying our disappointment so we don’t seem too ‘needy or difficult’. A beginning for the echoist is to simply ask themselves a few questions: Did I really do something so wrong? Or am I disappointed or angry in some way and afraid to feel it? This is the beginning of becoming aware that you do, indeed, have needs, preferences and a voice that needs to become heard.

An Ibiza Calm we recognise that many addicts show signs of echoism and therefore we have a team of experts that have a lot of experience with it. If you feel that you need to talk to someone about it or need any help or advice at all regarding addiction, please do not hesitate to call us on :